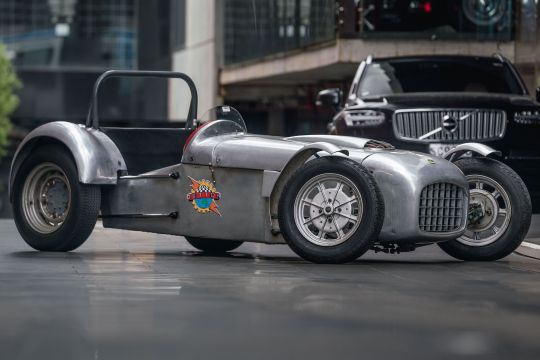 This rare Lotus MK VI is only 1 of 3 documented cars to be built by Lotus for competition use. It is aluminium bodied and has a documented racing history.
Over the standard Lotus MK VI kit sets available at the time, Lotus fitted the 3 factory built competition cars with De Dion rear ends, Elekton drums, FWA 1100 Coventry Climax engines, MGA gear boxes, and the optional alloy Cooper F3 wheels (with integral front brakes).

In the early 60s, there is record of this car having the FWA 1100 Coventry Climax replaced with a more conventional MG Magnette 1500. The car was then used for completion in this configuration for many years before it became retired in Japan.

During its retirement the car briefly made an appearance in the film Fast Lady.

For further information, please do not hesitate to contact us.