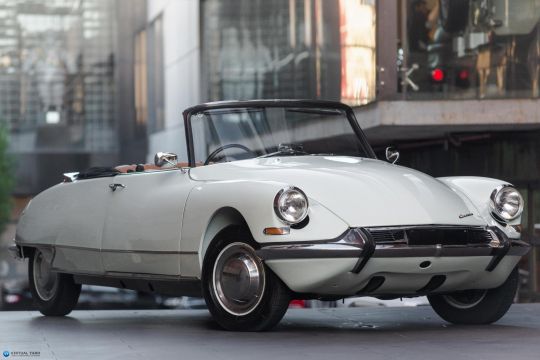 Designed by Flaminio Bertoni and Andre LeFerbve, the DS or Deesse meaning Goddess was a revolution at the 1955 Paris Motor Show.

Upon its popularity, and after initial reluctance, Citroen eventually approved it for production. They only produced 1365 Usine (factory) convertibles and this car is only of only 50 or so in RHD. This is a rare DW19 version with the more powerful manual DS motor.

Jim Reddiex who was the Queensland Citroen dealer in partnership with A.O Dutton & Sons the Victorian distributers here in Richmond, purchased the car in the UK in November 1973 just prior to him winning the 1974 World Rally Cup in a Citroen DS23. Jim imported the car and put it away in storage for some 35 years.

He also overhauled the HP pump and power steering rack, plus converting the hydraulic system to LHM mineral fluid.

This represents an extremely rare chance to purchase a very desirable collectible in this year, the 100th anniversary of Citroen.