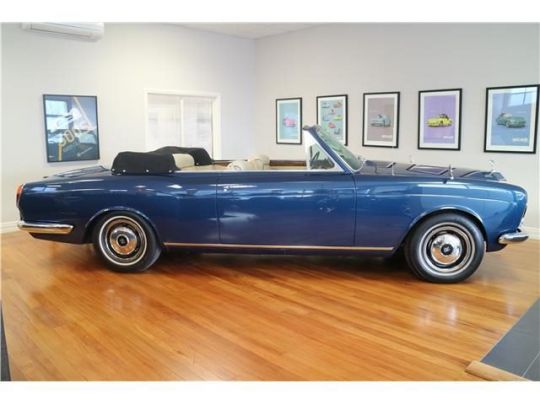 The Rolls-Royce Corniche is a two-door, front-engine, rear wheel drive five-seater manufactured and marketed by Rolls-Royce as a coup and convertible from 1971 to 1995.

The Corniche was a development of the Rolls-Royce Silver Shadow, with the two door variants. The model was assembled and finished in London at Mulliner Park Ward as continuation of the 1965 Silver Shadow coupe and 1966 Drophead, with the Corniche name applied in March 1966.
The name Corniche is originally the French and Italian term for a coastal road, especially along the face of a cliff.

The Corniche, used the standard Rolls-Royce V8 engine with an aluminium-silicon alloy block and aluminium cylinder heads with cast iron wet cylinder liners for a total of 6.75 L. This engine produce approximately 240 HorsePower (177 kW) for a top speed of 190 km/h (118 mph).

This first generation of Rolls Royce Corniche convertible was built in 1973 and registered for the first time in the U.K. in November the same year.
35 years later (Jul-2008), the car was starting his new life on the NZ roads with 77,000 miles on the clock. The current mileage is 82,765 miles (5,000 miles in 9 years). Only one NZ owner. This car has always been stored and well maintained.

Currently the only Rolls Royce Corniche for sale in the country. This car must have been seen to be appreciated.

For more information on this vehicle, please contact Tim Bennet at t.bennet@duttongarage.com