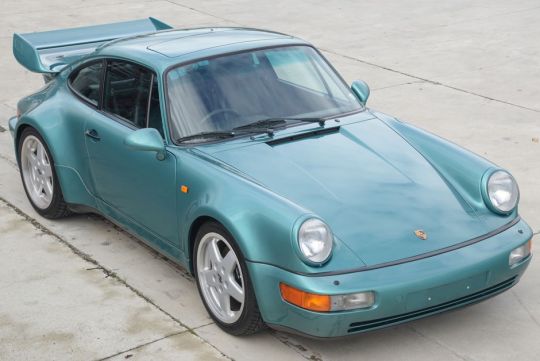 This is a very special Porsche 964 - 3.3 Turbo. Right Hand Drive with factory "X 33" Power upgrade. Presented in stunning Wimbledon green metallic with black leather. It benefits not only from the factory engine upgrade, but also extensive RUF fitted performance enhancements.

The car was a special order for the first owner in Singapore. Sold new by Stuttgart Auto, it was serviced by them for the first two years before going to RUF Automobile for maintenance thereafter. It was during this time that the car was fitted with a RUF secondary oil cooler, RUF suspension kit including shock absorbers and stabiliser bars, RUF alloy wheels and a new rear spoiler.

The car remained in Singapore until 1998, when it was sold to New Zealand. It has undergone regular maintenance by the authorised Porsche agent there ever since, and remains in outstanding original condition.

What really makes this car special though, is its engine. Starting out as a factory special order M30/69S X 33 option, consisting of modified cylinder heads, inlet and exhaust ports, intake manifold, camshafts and valve timing, this engine was rated at 355Hp and 471Nm of torque. But while the car was still in the Exclusive Department the decision was made to further upgrade the engine to full M30/69SL, or Turbo S specification. This employed even more aggressive camshafts, bigger fuel injectors and more boost to unleash 380Hp and 490Nm of torque.

A letter is included in the cars paperwork. It is from Rolf Sprenger from the Exclusive Department at Weissach congratulating the owner on the car, and outlining that the engine was made especially for him, and that all involved in its inception were very happy with its power output, and that this very engine specification had been chosen to be used in the upcoming lightweight turbo S for 1992. Only 81 of these fantastic cars were ever built, and remain one of the most sought after cars Porsche has ever produced.
Sprenger goes on to say that during testing in December 1991, the engine actually produced 380Hp and a maximum 508Nm of torque, even more than the factory quoted torque output, and he personally recommends the owner to "leave this outstanding works tuned engine as it is, because it is fantastic".

It is very rare today to find a 964 turbo in such good condition with such low mileage, let alone in a stunning period colour and with a documented works tuned engine upgrade. A significant car to suit the enthusiast or collector alike.