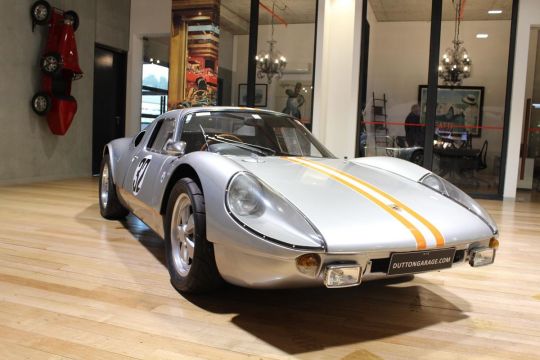 Meticulously crafted to the exacting standards of the period, this road-registered 1967 Porsche 904 GTS Recreation is one of only four copies built by Martin and Walker of the UK. It was built in the year 2000 using Porsche factory body mould directly from Stuttgart-Zuffenhausen and is accompanied by the original steel wheels. This is easily one of the most successful competition cars Porsche ever built!

Ferdinand Alexander Butzi Porsche III, the son of company chairman Ferry Porsche, was the designer of the 904 and it was his sentimental favorite among his designs. As the new head of Porsche's design department, Ferdinand Alexander Butzi Porsche III shouldered an immense responsibility to uphold the fine traditions of the brand. The 904 had to be functional and sustainable, and it far exceeded his expectations as he used the 1961 Model 718 competition coupe as his original inspiration!

Porsche's 904, officially called the Carrera GTS, succeeded the RSK Type 718 as the last sports-racing iteration of the 356 series. Developed after Porsche left Formula One in 1962, the 904 was also the last full-competition Porsche that could be readily driven on the street.

This race car is strong in character and style with its distinctive tail and ultra-low height that exudes aggression and athleticism. It is powered by a potent 3.0 Litre flat six on twin Weber carburetors with a rear mounted 915 manual transmission. Notice the limited slip differential, independent front suspension with double wishbones and coil springs, independent rear multi-link suspension with coil springs, and hydraulic disc brakes. This 904 GTS Recreation will soar to 60 mph in as little as 5.5 seconds, as the body shell was made of fiberglass in order to reduce weight.

This machine harkens an era when the joy and art of driving compelled the most dynamic of machines.