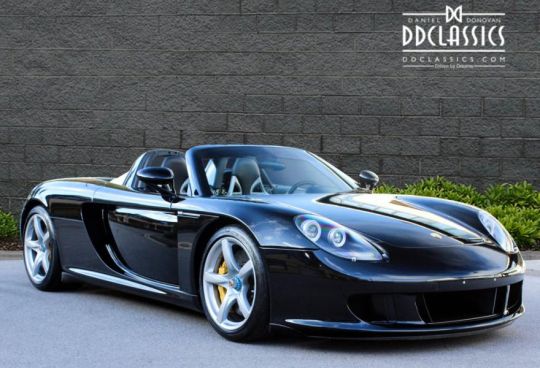 One of the most evocative model designations in motoring history, ‘Carrera’ has been adorning Porsches since the mid-1950s. In 2004 the new flagship supercar recalls looks from the original Type 550 to place itself as the supercar of the early 2000s.

Developing ‘Project Code 80’ following Porsche’s Le Mans win with the 911 GT1 in 1998, the underpinnings of the Carrera GT are developed straight from the legendary French race track. The resurrection of an earlier 5.5 litre V10 engine seemed fitting for the new Carrera GT, but was increased to 5.7 litres. Only a traditional 6-speed manual gearbox was available, usable through the iconic birch and ash gear knob, found in the 917. Porsche only initially offered a basic 5 colour choice for the exterior finish, making it clear that the Carrera GTs character is conceived from a performance background.

Our car, which is in our West London showroom, has been shrewdly used, covering just 20,783 km since new. Presented in superb condition inside and out. It is believed to be 1 of around 120 Carrera GTs which were specified in Basalt Black, making this car a very rare proposition in the highly desirable Black on Black combination.

As you would expect from thoughtful usage, the interior remains in a stunning condition, as is the paintwork all around the vehicle. The wheels are all unmarked, and the electric controlled rear wing is working correctly.

Our Carrera GT has been freshly treated to a comprehensive service at Porsche Centre, Stuttgart (26th October 2017). Accompanying this beautiful supercar is the original book pack and service history.