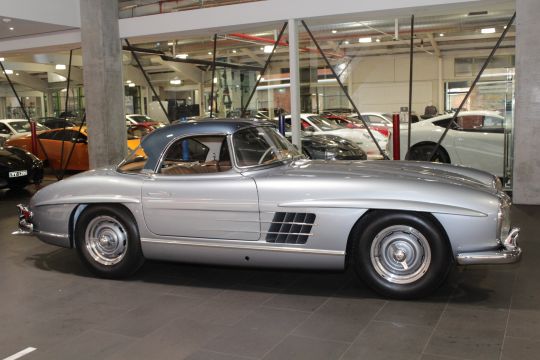 At the 1957 Geneva Motor Show, Mercedes-Benz introduced a new version of the celebrated 300 SL wearing open coachwork: the 300 SL Roadster. In an early suggestion of the increasing focus the manufacturer would place on luxury cars over the ensuing decades, the new roadster was above all a more refined car than its gull-winged predecessor.

This stunning 1958 300 SL is accompanied with a Daimler-Benz data card, a copy of which is on file, as having been destined for a Mr. Johnson of New York, equipped with the 3.89:1 rear axle ratio and a side-view mirror, and built to the usual American specifications. Later part of Steven Wolf’s well-known Florida collection, it was restored several years ago, in what was obviously a superb and exacting effort in Metallic Silver-Blue with tan leather upholstery, a new dark blue soft top, and all interior components properly restored in the correct materials and finishes.

Interestingly, the car is fitted with a later alloy engine block, a desirable upgrade correct to the final production 300 SL roadsters, as it results in a considerably lighter front end and appropriately more well-balanced handling. The engine block in the car bears its correct original tag but is unstamped, and may well have been a factory-authorized replacement in period.

The car is also equipped with the stylish racing-influenced Rudge wheels. Something of an icon of 1950s Mercedes performance, these wheels proved popular on the Gullwing, especially those examples that saw track use, but relatively few roadsters were fitted with them—making the set on this car rare indeed. The car is also equipped, as per its factory data card, with a full set of fitted luggage, ideal for touring in a Grand Tourer, especially one with, as on the 300 SL Roadster, an unusually shaped trunk compartment. The crowning touch is a removable hardtop in medium blue, which contrasts beautifully with the lighter body panels. The roadster’s factory removable hardtop was designed “into” the car, so that unlike many removable tops, which appear awkward and out of place when installed, it appears right at home and produces a beautiful, snug closed coupe. In fact, it almost recalls the Gullwing.

In addition to its “triple crown” of options, this car is equipped with a later upgrade to European-style single-lens headlamps. Many feel that this improves the overall appearance of a roadster, and here, the lenses are fresh and beautiful. The 300 SL rides on sports racing tires with a period-correct appearance and shows 21,650 miles, and it is accompanied by original radio manuals; an original English owner’s manual, service booklet, catalogue, and service directory; and a German language service directory.

Today, the 300 SL Roadster still carries with it an indelible aura of speed, power, and sophisticated style. Fast enough for the sports car lover, and comfortable enough for those who demand some luxury, it has remained one of the most admired automobiles in the world for nearly 60 years. Our car offered here, with its unusually high assortment of desirable options and accessories, which, combined with a beautiful restoration in an outstanding choice of colours, makes it one of the most attractive examples still on the road.