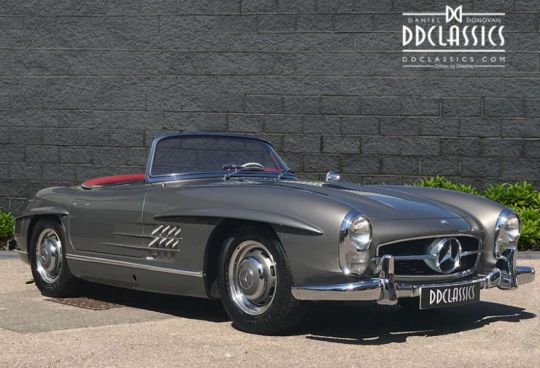 Created to spearhead the Mercedes-Benz return to competition in the post-war era, the 300SL’s progenitor designated ‘W194’ in factory parlance debuted in the 1952 Mille-Miglia finishing 2nd and 4th overall. Wins in the Carrera Pan-America and at Le Mans followed, and the SL family was on its way to becoming part of motor sporting legend.

Launched in 1954, the production 300SL was a supercar long before the word was first coined. The road car owed its existence in no small part to Max Hoffman the New York based, Austrian born importer of European luxury makes without whose vision and encouragement the factory might not have had the confidence to proceed with the project at all.

The 300SL retained the space frame chassis of the race car and was powered by a 2,996cc overhead camshaft, inline 6 canted at 45 degrees to achieve a lower more dynamic bonnet line. Using innovative direct fuel injection this state of the art engine produced 215bhp at 5,800rpm and each unit was exhaustively dynamometer tested prior to final installation. A four speed gearbox transmitted power to the hypoid bevel rear axle, while suspension was independent all round by wishbones and coil springs at the front with swing axles and coil springs at the rear.

At the 1957 Geneva Motor Show Mercedes-Benz introduced a new version of the celebrated 300SL wearing open coachwork and the 300SL Roadster was born. Production started in May of 1957 and the new roadster had a whopping list price of 32,500DM making it more expensive than its gullwing brother by 13,500DM. Such a greater price tag suggested the importance of this car when new and can only be described as the gentleman’s sports car.

Our spectacular 300SL is finished in ‘172G’ Anthracite grey metallic with Bordeaux hide. Correct detailing in every department, having been subjected to a nut and bolt concours restoration by internationally renowned 300SL expert and restorer Rudi & Company.

A true reflection of the standard of workmanship and gravity of the importance of this car is that it won 1st place at the Danville concours d’Elegance which was exclusively held at the Blackhawk Museum in California. This extraordinary, early example Roadster is complete with its original toolkit, wheel jack, owners manual, Mercedes-Benz 300SL catalogue and spare keys.

Fitted with the correct period Blaupunkt radio and original Tabol & Co. of Berlin drivers wing mirror, every detail of this magnificent example is correct.

Today, the 300SL Roadster still carries with it an indelible aura of speed, power and sophisticated style. Fast enough for the sports car lover and comfortable enough for those who demand some luxury, it has remained one of the most admired automobiles in the world for nearly 60 years.

Offered here in its outstanding colour combination this 300SL Roadster is a truly world class example and it is definitely one of the most attractive examples anywhere.