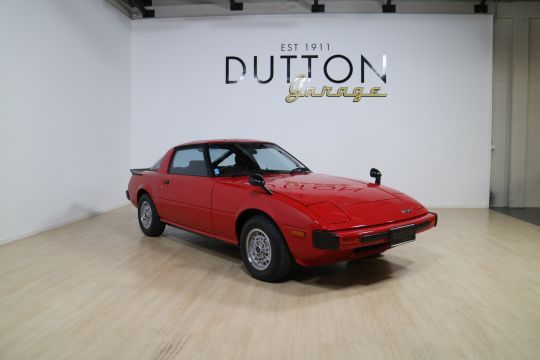 Dutton Garage is proud to present this extremely rare opportunity to own a 9,500 km 1979 Mazda RX-7 Special Edition (SE).

Nearing the end of the 1970’s, affordable sports cars were a fast dying breed. The common and quirky roadsters from the 50’s and 60’s were struggling to meet and adapt to the new era of safety standards and emissions. Stop gap emission systems, lower compression, and low speed impact bumpers were being slammed down the throats of manufactures. This did nothing pleasing for the aesthetics or weight of the vehicles they were producing.

In 1979 Mazda came to the playing field with what was released as the 1979 S1 Mazda RX-7. This stunned the Japanese market, as the car met the minimum Japanese Government vehicle dimensions and had a small enough rotary engine. Interestingly enough it produced more power than the inlines on the market at the time, meaning it bypassed the majority of annual road taxes for larger vehicles. This made the RX-7 very appealing to the public as it was an affordable sports car, one that had the same handling balance and characteristics of some of the market leaders.

The first series of the SA RX-7 (Named after the first few letters of its vin tag) was an instant success. Using a two rotor version of Dr. Felix Wankel’s rotary engine, the Rx-7’s 1.1 litre engine (The 12A) produced 100hp and 105 lb-ft of torque. That was more than enough to push its mere 1050kg to 100kph in less than 10 seconds. The 50/50 weight distribution, that made the RX-7 so desirable to the sports car market, was largely due to the engine being mounted behind the front axle.

Much like other sports cars on the market at the time, the RX-7’s 12A rotary engine was so smooth that in order to stop its operator from flying past its 7000rpm red line, a simple electric buzzer was installed to notify them.

This stunning example of an SA RX-7, possible even the best example in the world, is in 100% original form and has been extremely well maintained, a credit to its former keeper.
For more information on this vehicle please contact us directly. Thank you for taking the time to review our stunning hand picked vehicle.