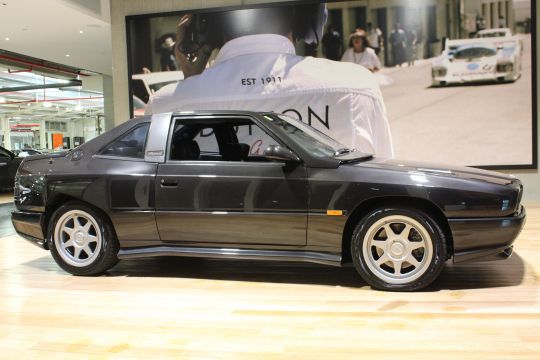 This Maserati Shamal was delivered new to Adelaide, Australia. 1 of only 369 ever built.

Named after a warm wind in the Mesopotamian desert, the Shamal marked a radical evolution in the Biturbo family tree. Styled by Marcello Gandini - designer of the Khamsin and Quattroporte II in his Bertone days -, it was a proper 2+2 coupé with a very aggressive stance. It used a modified Biturbo shell with new body panels and a completely new rear section. The wheelbase was the same as the Karif's, but the cabin allowed more room for rear passengers.

Meant as an all-out performance GT, the Shamal inaugurated the new generation of V8s which would subsequently power the Quattroporte IV and 3200 GT. The new unit boasted 4 DOH camshafts 4-valve-heads and the usual twin-turbo, twin intercooler set-up, good for a staggering 326 hp and 436 Nm of torque from 3.2 litres. The Getrag 6-speed manual gearbox was the first one mounted in a production Maserati, and indeed an advanced feature for the time.

The Maserati Shamal ran from 1990 until 1996. This example is the last of the model being built in 1996. It comes with a 3.2L Bi-Turbo V8 producing 326BHP. This car was way ahead of its time. It was the fastest production Maserati ever built.

Genuine 3 owner car from new. The previous owner who had owned it for 4 years only travelled 1,600Kms.

The car was last serviced by Auto Sprint in Melbourne.