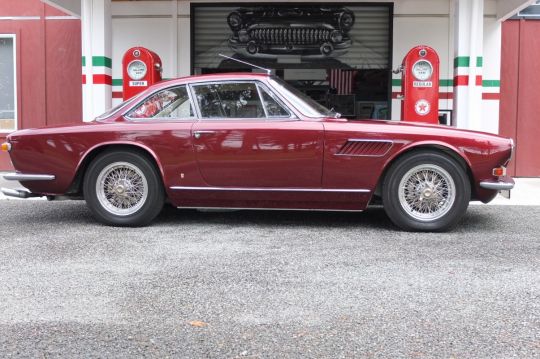 Highly regarded and highly coveted, this 1966 Maserati Sebring is finished in a Rubino Rosso paint on Black Leather. It is one of only 38 RH Drive built. Delivered new in South Africa where it remained for many years before making its way to New Zealand in the 80s'. Flawless in every regard, this Maserati is accompanied by matching and original numbers.

The Sebring was named for the Florida airfield track, where, in 1957, Maserati took first and second place in the famous 12 hour race! In 1961, Vignale presented the first variation of this stunning machine, based on the Maserati 3500 GT,

The Sebring 2+2 coupe then entered production in 1962 alongside the regular 3500 GT with a number of small aesthetic modifications. The chassis was similar to that of the 3500 GT spyder, at 2.5 metres long. Lucas direct fuel injection was fitted as standard, denoted by the models 3500 GTI S title, before the Sebring moniker of the initial prototype became widely adopted. Sportier than the 3500 GT, the Sebring was intended as an occasional 2-plus-2-seater with a simple bench seat in the rear. The engine had 235 hp on tap, generating speeds in excess of 145 mph. Disc brakes came as standard whereas the automatic gearbox was an option.

In 1965 the Maserati Sebring was revised as it is now referred to it as the Sebring 2+2, and the 3.7 litre power unit, first introduced with the Mistral, became available in the Sebring. With 265 hp the level of performance was impressive, as attested by the 255 kph top speed (158 mph)!

Stylistically, the modifications included a restyled front end with a chrome plate housing the double headlights, a new bonnet intake, and the side vents located higher up on the front wings. Only a combined total of 245 second series Sebring’s 3.7 were assembled from 1964 to 1968!