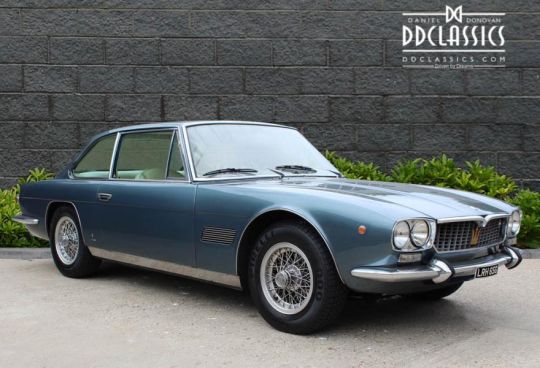 A matching numbers 4.2-litre model equipped with the desirable five-speed manual gearbox, this particular Mexico was delivered new to Mr Pasquali Renato in Bologna, Italy in February 1969. Mr Pasqualli kept the Maserati for seven years before selling it to Mr Adam Rosenblatt of Mill Valley, California, USA in July 1976. After some 30-plus years in the USA, the car was exported again (in 2008) on this occasion to the Netherlands where its third owner, a Mr Klaus from Rotterdam, kept it for two years.

The fourth owner, bought the car from Mr Klaus in 2010 and had it treated to an extensive ‘bare metal’ restoration in 2012. Works carried out included a bare metal re-spray in a fabulous Blu Ischia; interior re-trim in Linen  leather; dashboard and restored clocks and switches. the fitting of Electric power-assisted steering is the only noted, very sensible modification.

Since then the Mexico has been driven and enjoyed frequently, covering some 1,788 miles since the restoration’s completion. The car is offered with Maserati heritage certificate; old Certificate of Title; old bill of sale; service invoices dating back to the 1980s; photographs and invoices relating to the 2012 restoration and UK registration papers. Owner’s and spare parts manuals also accompany the vehicle.