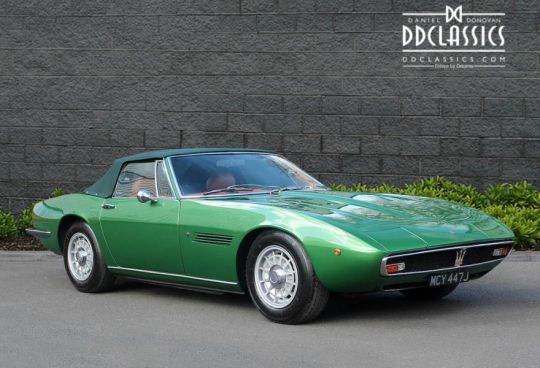 Ghibli was the first Maserati Supercar, launched in 1966 and named after a hot wind blowing across the Sahara, the styling was by a young Giorgetto Giugiaro then working at Ghia while the mechanical design was the work of Maserati’s chief engineer, Giulio Alfieri. The Ghibli was a direct rival to the Ferrari Daytona, more expensive when new and regarded by Classic & Sportscar magazine in 2010, to be a much more pleasant car to drive and own.

This car, chassis number AM11549 1814, is a late Ghibli with the most desirable 4.9  SS configuration. Manufactured in 1971 and imported into England in 1989 by Richard Lee, who owned the car until 2012. During that 20 year period, Mr. Lee spent a vast amount of money on his beloved Ghibli, including having an engine rebuild by Colin Clarke engineering and had the car expertly adapted to Spider configuration by the experienced and well-respected Eddie Noone of Vale Cottage Coachworks.

A Vale Cottage conversion was almost indistinguishable from the original Spyder to all but the most expert eye and also included the all-important stiffening of the bodyshell, just like Maserati did on the originals.

The car was exported to Holland in 2013 by an established Dutch collector, whilst there the owner expended a considerable sum re-spraying the car to his taste in the stunning Verde Indy it is presented in today. Inside, the interior received a total restoration in the finest Tobacco hide along with a new Dark Green Mohair hood, it is a truly beautiful colour combination that must be seen to be appreciated.

Presented in fabulous condition throughout, the car has been inspected by one of the world’s leading classic Maserati experts and at that time had 3 point seat belts fitted with hood adjustment and a replacement of the windscreen seal.

This particular example is very well known in Maserati circles having been selected as Sponsors choice at the 2016 Maserati Club Concours event. Being a matching numbers car and with a high-quality conversion, it is capable of offering all of the excitement and majesty of an original Spyder, but for less than half the price. A similar concours car was sold by Goodings at the 2016 Pebble Beach auctions in Monterey for $1,500,000.

For more information on this stunning vehicle, please contact us at any time.