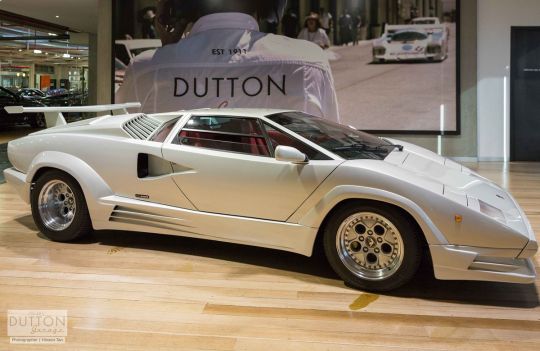 Named to honor the company’s twenty fifth anniversary in 1988. This car is a Euro Spec car; the engine fitted with 6 Double Barrel Weber 44 DCNF down Draft Carburetors producing 455 BHP. The anniversary model has had considerable restyling, having enlarged and extended the rear "air box" intake ducts amongst other refinements to the car.
Another feature of the car was 345/35 R 15 tiers, the wildest tier available at the time. The 25th Anniversary was the most sought after, refined and possibly the fastest of the Lamborghini Countachs. 0-60mph in 4.7 seconds and 183mph top speed.
This car also has extremely low Kilometers and is in absolute stunning condition.
For more details please contact us.