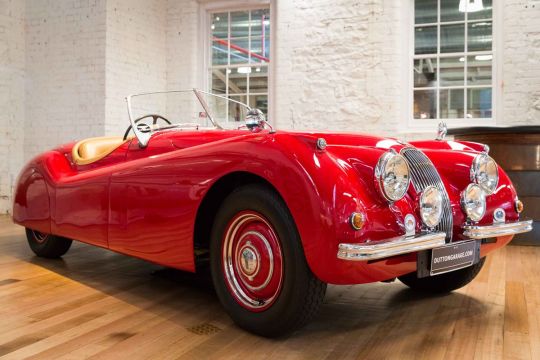 We proudly present our beautifully restored 1953 Jaguar XK120 Roadster finished in Diablo Red over Biscuit Leathers. Fast, stunning, and successful on the race track, the XK120 was the ultimate production sports car of the 1950s! Car enthusiasts were enamored with this creation, as 12,078 XK120s were sold. This far-surpassed Jaguar's wildest expectations.
Our 1953 Jaguar XK-120 OTS Roadster was masterfully crafted at Jaguar's Browns Lane factory. It was sold new in Australia on the 21st April 1954 in Sydney. In 1968 the car was purchased by Alan Thearle of Killara who took meticulous care to restore it to its pristine condition. The last owner purchased the car in 2004.
Jaguar boss William Lyons strongly influenced the swooping and curvaceous styling that captures the attention of all onlookers. In addition to that undeniably gorgeous coachwork, our XK120 is opulently trimmed with top-of-the-line finishing.
The stunning bodywork cloaks a sturdy chassis, which mates torsion bar independent front suspension to a live rear axle on leaf springs. It is complete with large hydraulic drum brakes at all four corners. Powering this incredible automotive gem is an inline double-overhead-camshaft six cylinder engine displacing 3.4 Liters generating 160bhp and a lovely exhaust note. The power is elegantly managed via a four-speed manual gearbox, which helps our XK120 rocket to 120mph! Our Jaguar is extremely quick; soaring to 60 mph in less than 10 seconds. This was quite impressive for 1953, as performance was on a par with much more exotic machines costing twice as much! From the very beginning, the new Jaguar was taken racing and rallying with great success.
Though considered sturdy in feel, the XK120 is still a quick car that can easily keep up with modern traffic and the demands that come along with it! It is immensely popular and highly regarded with enduring style that exudes glamour and classic elegance that is second to none.