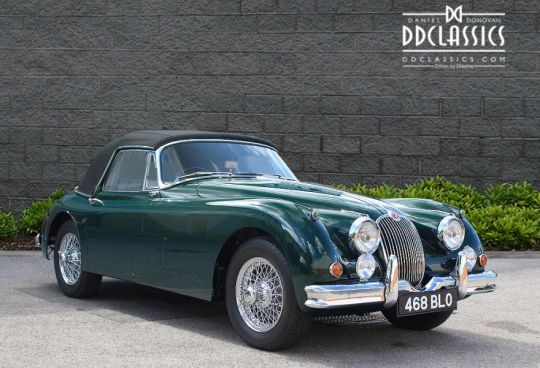 The XK series (XK120, XK140 & XK150) of cars first took the world by storm at the 1948 British Motor Show. A car conceived to show off William Heynes new magnificent straight six engine based on the fact that the new Jaguar Saloon (MKVII) was not ready, due to manufacturing problems with its large steel body parts. The XK was the car that basically put Jaguar on the road of producing high performance sports cars.

The ultimate car in the initial XK series, the 150 was launched in May 1957. It was bigger and heavier than the previous cars and in reality it was far more of a Grand Tourer than a sportscar. The XK150 was the first series production car to be offered with all wheel disc brakes that had been so successfully developed by Jaguar for the Le Man 24 hr race.

Starting life with a 3.4 litre engine, the XK150 required more power due to its increased weight and ultimately a 3.8 engine was offered both in stand and three carburettor “S” specification.

Ironically many of the “S” specification cars languished in Jaguar showrooms around the world due to the launch of the new Jaguar E-Type, but today the XK150 3.8S cars are the rarest of all production Jaguar’s and as a result that is reflected in the value.

DD Classics is proud to offer this exceptionally rare example, the very last XK150 DHC ever built and 1 of only 68 3.8 S DHC examples built in RHD, this car has received a full nut and bolt restoration over the last 10 years to the original specification it left Brown’s Lane in 1960. Finished beautifully in British Racing Green with superb Suede Green hide this is a truly fabulous combination that must be seen to be really appreciated.

The body was restored and engine rebuilt by Pebble Beach Winning restorers, all other work including spraying was completed by Terry Rudd and the car was re-trimmed by BAS of Cwmbran.

This car is the very last XK150 3.8S DHC ever to be produced and features the very desirable overdrive.