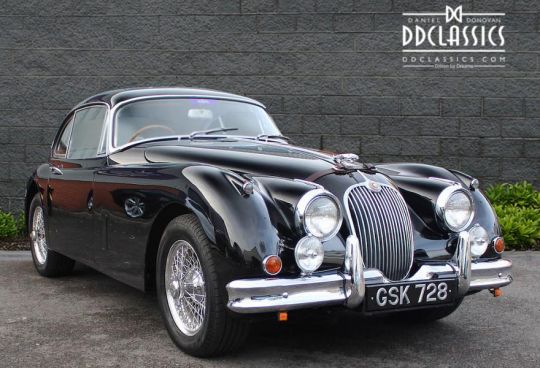 Our Jaguar XK150 has been fastidiously maintained over the course of its life, receiving a bare metal respray (fully documented), an air-conditioning system installed by Guy Broad, as well as electronic steering and a complete electric re-wiring (incl. conversion to 12V system). It has new tires and has been carefully maintained by marque specialists every year. Supplied with a huge history folder consisting of bills totalling more than £100,000. Today, it would cost even more to bring the car to such an astonishing standard.

A very special, internationally known RHD Jaguar XK 150 Coupé in which more than £120,000 has been invested. The car used to belong to Eric Stewart, lead guitarist of 1970s super-group 10CC, who originally brought the rust-free car over from the USA and invested a small fortune in the car, uprating it significantly. He had an enlarged, uprated XK Radford competition engine with 4.5litres and triple Weber carbs installed (producing more than 300 hp), a Getrag 5-speed gearbox, enlarged uprated disc brakes all around, respray, new leather interior, re-chromed bumpers etc.