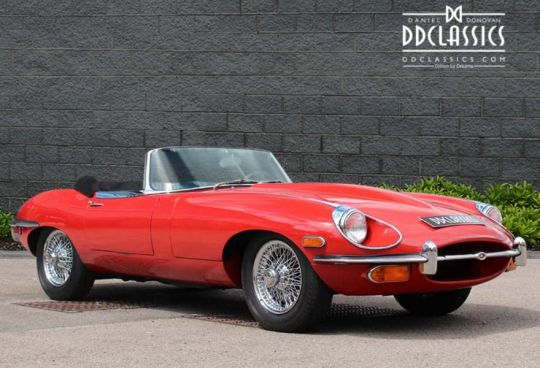 The Jaguar E Type was nothing short of a sensation when revealed to the world for the first time in 1961 at the Geneva Motor show. It was so iconic a design that Enzo Ferrari famously said: “it’s the most beautiful car in the world!” With its superb lines and affordable price, the E type demand grew into iconic status, delighting enthusiasts and collectors into the next century.

E Types were offered with independent front and rear suspension, front and rear disk brakes, the rear brakes were inboard to reduce unsprung weight. Initially launched with the trusted 3.8 liters straight 6 engine from the XK 150, the early cars saw ongoing development over the next 4 years. 1965 saw the introduction of the newly developed and highly rated straight 6 cylinders, 4.2 Litre mated to a four-speed full synchromesh manual gearbox; this engine stayed in production up until the early 1990’s.

For the 1969 model year, the Series II arrived, which was substantially the same mechanically as the Series I, but featured a number of safety improvements to satisfy new American legislation. The Series II contained much of the charm of the Series I without the heaviness of the later Series III cars. Series II updates included improved cooling thanks to a larger intake opening, improved lighting, open headlight buckets, and full-width rear bumper.

Finished in Signal Red coachwork with Ebony Black hide and matching Black vinyl soft top. the car stands elegantly as the day it rolled off the production line with newly fitted chrome wire wheels with two ear spinners. The first owner purchased this car in Atlanta, Georgia, selling it to the second owner on March 15th, 1977. The third owner is then known to have purchased the car June 20th, 1989. He retained the car for more than twenty years, selling it in 2012. During his long-term ownership, the car spent the vast majority of its time in the Metro Atlanta where the car was restored. During the restoration, the head was removed and replaced with a Series III XJ6 head. These later heads have larger valves and breathe better than the earlier heads, which improves performance. Additionally, the car was converted to the triple SU carburetor configuration of the Series I cars (US spec Series II cars originally had twin Stromberg carburetors for emissions reasons).

The car comes with several spare parts including the original twin carburetor intake manifold (complete with carbs and air filter mount), an earlier series cylinder head, tool roll, tools, hammer, jack, and knock off spanner. A spare set of pistons and assorted mechanical parts are also included and are assumed to be original to the car. Also included are copious amounts of documents, receipts dating back to 1975, numerous photos of the restoration, an original owner’s manual, service manual, various parts books, and assorted Jaguar specialty literature.

This is an excellent opportunity to acquire a great driving, solid, and honest E-Type Roadster with long-term ownership history. This Jaguar is a strong value compared to the Series I Roadster.