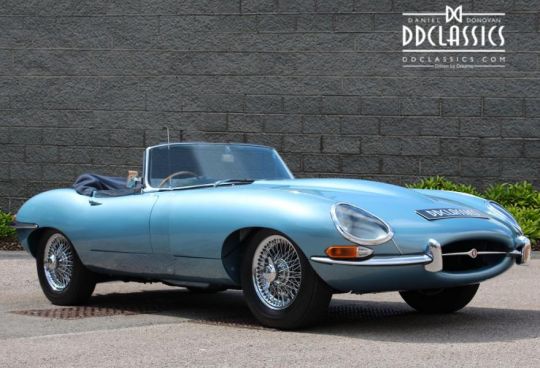 The Jaguar E Type was nothing short of a sensation when revealed to the world for the first time in 1961 at the Geneva Motor show. It was so iconic a design that  Enzo Ferrari famously said “it’s the most beautiful car in the world”. With its superb lines and affordable price, the E type demand  grew into iconic status, delighting enthusiasts and collectors into the next century.

E Types were offered with independent front and rear suspension, front and rear disk brakes, the rear brakes were inboard to reduce unsprung weight. Initially launched with the trusted 3.8 litre straight 6 engine from the XK 150, the early cars saw ongoing development over the next 4 years. 1965 saw the introduction of the newly developed and highly rated straight 6 cylinder, 4.2 Litre mated to a four speed full synchromesh manual gearbox; this engine stayed in production up until the early 1990’s.

Our wonderful example rolled off the production line at Browns Lane on the 3rd of January 1966 and was delivered to Jaguar Cars New York. The car was subsequently sold via the manufacturer’s  agents. Imported from the USA the car was the subject of a comprehensive restoration to a good standard and was then registered in the UK in 1990.