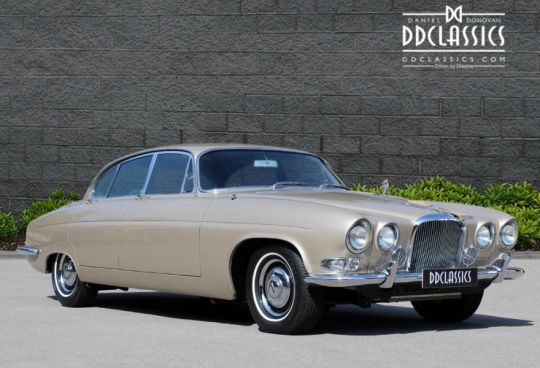 ‘Undoubtedly the biggest surprise which this new Jaguar gives on taking the wheel for the first time concerns the matter of size. Its beautiful sweeping lines seen from the outside, and its spacious and luxurious interior sampled from within, both suggest the large car that it really is … yet it does not feel a large car to drive. The finger-light controls, the good forward vision and, above all, the taut “oneness” about the whole car all combine to place a driver immediately at ease.’ – Motor magazine on the Jaguar Mark X.

Launched in October 1961, the Jaguar Mark X had been developed to suit the North American market and was a large car by European standards. It was also technically more advanced than preceding Jaguar saloons and featured independent rear suspension similar to that of the E-Type sports car. The same unit as that fitted to the contemporary E-Type, its engine was the tried-and-tested 3.8-litre XK six producing 265bhp on triple SU carburetors, and for a car weighing around two tons, the 120mph Mark X was impressively quick, though inevitably the weight took its toll of the fuel consumption. The interior, like that of all Jaguar saloons, was exceptionally well appointed and comfortable, and the Mark X came with power-assisted steering as standard. By the time the face-lifted 420G version came along in 1966, the Mark X was being built with the 4.2-litre engine and (optional) all-synchromesh gearbox while incorporating numerous other improvements.

Build completion at Browns Lane Coventry was the 24th December 1965, making this incredible car one of the last of line Mark X before the new 420G was introduced the following year. As per the Jaguar ‘ heritage ‘ certificate, the cars first owner was Mr. Karl Bauer supplied via Jaguar cars New York, fitted from new with the highly desirable automatic gearbox and front, and rear air conditioning.

Subjected to a nut and bolt Concours restoration which today would cost circa £300,000 to duplicate the standard of workmanship (in 40 years in the industry we have not seen a better restored car) Since completion, the car has entered into the world of Concours where its awards say 1000 words of its beauty.

The elegant Rapide, functional yet luxurious, provides space for up to four adults combined with an engaging driving experience synonymous with all Aston Martins. A 301 litre luggage compartment affords generous space for belongings for all four passengers, creating an Aston Martin which can be enjoyed on any occasion, anytime, anywhere. At the heart of the Rapide lies an evocative engine providing effortless power and torque: a hand-built 6.0-litre V12 engine producing 470 bhp (477 PS / 350 kW) with peak power being delivered at 6000 rpm and 600 Nm (443 lb.ft) peak torque at 5000 rpm. A specifically tuned six-speed Touchtronic 2 automatic transmission features as standard, allowing the driver to change gear automatically or manually via the steering column-mounted magnesium paddles.