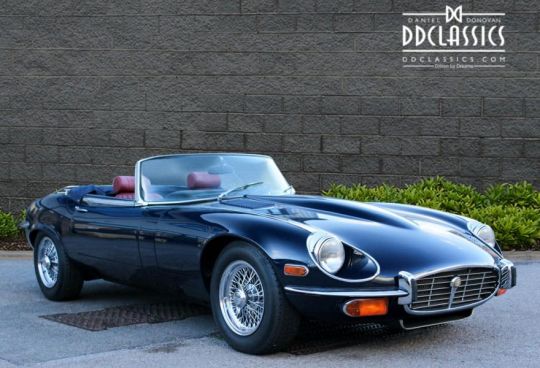 ‘The V12 E-Type was at its best as a long-distance, high-speed tourer. There were few cars which could match its top speed and 120/130mph cruising ability, even amongst the exotica from Italy, and none at all the silence and smoothness of its engine.’ – Paul Skilleter, The Jaguar E-Type.

One consequence of the E-Type’s long process of development had been a gradual increase in weight, but a good measure of the concomitant loss of performance was restored in 1971 with the arrival of what would be the final version – the Series III V12. Weighing only 80lb more than the cast-iron-block 4.2-litre XK six, the new all-alloy, 5.3-litre, overhead-camshaft V12 produced 272bhp, an output good enough for a top speed comfortably in excess of 140mph. Further good news was that the 0-100mph time of around 16 seconds made the V12 the fastest-accelerating E-Type ever.

As per the supplied heritage certificate, Our magnificent E-Type was manufactured on the 10th May 1973 and originally distributed to New York, USA. Having just 2 owners up to 1992, the E-Type was bought by a Jaguar specialist from Germany, who sourced the car from the dryer climates of the south.

Shipment was made back to Bremerhaven, Germany and the car stayed unrestored for several years until the 3rd owner treated the car to a total nut and bolt restoration in Germany. Reportedly a 3-year full restoration took place, with particular attention paid to weaker cavities, where rust-protection was applied to ensure a lasting rebuild. Towards the end of the 90s the interior also received a no expense spared re-trim using the finest hides from Connelly. The dashboard was re-fitted to an equally high standard, finished in Burl Walnut Wood.

In 2007 the original engine underwent significant work, including new pistons and any wear and tear parts were replaced. The engine has travelled 11,000 miles since these works were completed. The E-Type was then sold to the 4th owner who maintained the car generously with invoices totalling to circa 90,000 Euros to date.

Presented here at our West London showroom is this beautiful Series 3 V12 in the desirable combination of Westminster Blue over deep Red hide, coming with the car is also a choice of convertible roofs, finished in matching luxurious Red or sumptuous Midnight Blue.

As you would expect from such expenditure, the finish of the car is exquisite throughout. All the chrome bumpers and fittings are straight and superbly finished and all the panels fit as they should. Looking down the sides of the vehicle, the paint and panel work is straight and pristine.

On the road the series 3 is a delight to drive, the original manual gearbox is engaging and one can’t help but keep returning to the V12 roar, which is so special to open top touring.