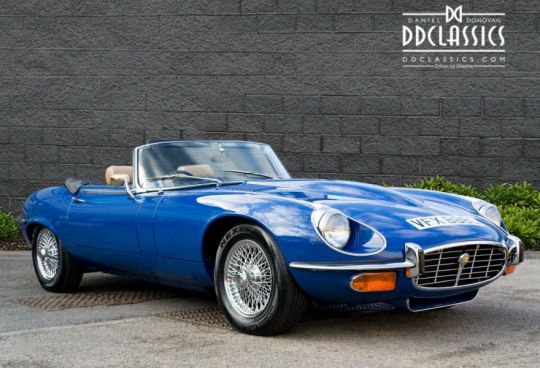 ‘The V12 E-Type was at its best as a long-distance, high-speed tourer. There were few cars which could match its top speed and 120/130mph cruising ability, even amongst the exotica from Italy, and none at all the silence and smoothness of its engine.’ – Paul Skilleter, The Jaguar E-Type.

One consequence of the E-Type’s long process of development had been a gradual increase in weight, but a good measure of the concomitant loss of performance was restored in 1971 with the arrival of what would be the final version – the Series III V12. Weighing only 80lb more than the cast-iron-block 4.2-litre XK six, the new all-alloy, 5.3-litre, overhead-camshaft V12 produced 272bhp, an output good enough for a top speed comfortably in excess of 140mph. Further good news was that the 0-100mph time of around 16 seconds made the V12 the fastest-accelerating E-Type ever.

As per the supplied heritage certificate, Our magnificent E-Type was manufactured on the 16 March 1973. This stunning, matching numbers, manual transmission example still carries its original specification paint and interior and is without doubt one of the finest E Type Roadsters for sale anywhere today.

Cosmetically and mechanically the Roadster is truly one of the finest examples that you could possibly find.