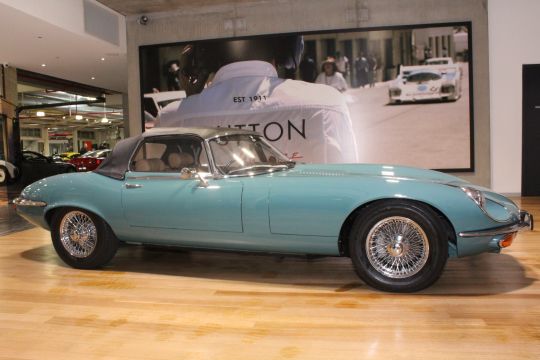 When the Jaguar E Type was announced at the London Motor Show in 1961 it stole the show in the same way as the Jaguar XK120 had when it was first exhibited.  However, the E Type specification was even more advanced compared to its contemporaries, with its 4 wheel independent suspension, 4 wheel disc brakes, inboard at the rear, semi-monocoque construction and strikingly beautiful lines.

The design was clearly based on the highly successful sports/ racing D Type, but with the added benefit of independent rear suspension, and powered by a 3 carburettor 3.8 litre version of Jaguars famous XK inline six cylinder engine.  Coupled with a selling price far below that of any comparable car and a remarkable blend of performance, ride/handling and docility, the E type was absolutely outstanding in its appeal to virtually every keen motorist, and to the general public as well.  Most people know the story that when Enzo Ferrari himself saw the car at its release, he proclaimed it the most beautiful car ever made.

The design was steadily developed until 1971 when the Series III was announced, powered by the exciting new 5.3 litre V12 engine which gave the E Type even more performance, and a further increase in high speed cruising capability.

The remarkable very low mileage car we have on offer here is one for the true collector.  Purchased new in Scotland by an Australian buyer for Tourist Delivery, it covered around 6,000 miles before being shipped to Australia in early 1975.  It was driven for a short period before being placed in storage.  The second owner purchased the car in August 1990 with 6,356 miles, and performed minor recommissioning service work along with concours preparation by a Jaguar specialist.  The car was then driven sparingly, and entered in various Jaguar club events.  Accompanying the car are hand written notes from 1990 to 2006 listing the date, mileage and destination of every time the car was driven for the next 1,000 miles or so, and is a fascinating insight into long term ownership of a classic such as this.

Dutton Garage purchased the car in 2013 with 11,614 miles and re sold it straight away to the third private owner.  He didn’t use the car a great deal, putting less than 150 miles on the odometer, but the car wasn’t neglected, with a major service performed by a Jaguar specialist in September 2015.  During this service a compression and leakdown test was performed, with a perfect result.  The cooling system was also rebuilt, with the radiator being serviced, and the expansion tank, hoses, clamps, thermostats, gaskets and temperature sender unit all replaced.

Due to lack of use, the car was offered back to us and we are proud to be able to have it available now to the discerning buyer.

Now showing 11,761 miles, this stunning E Type is a credit to its sympathetic previous owners.  Resplendent in its original Turquoise paintwork with Biscuit interior trim, the car is complete with all its original books, documentation, factory brochure, tools and equipment, and must be seen to be appreciated.  Even the original soft top roof is unmarked, with none of the patch repairs common to the model, and the rear window is clear and as new.