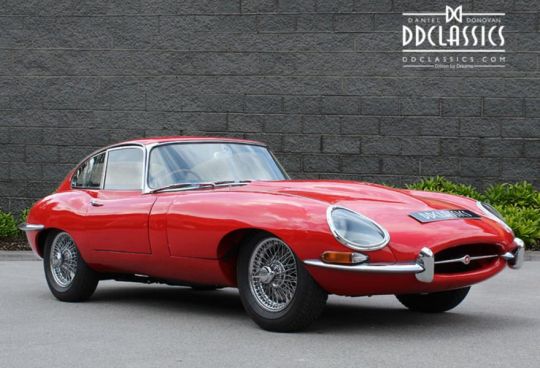 The E-Type was unveiled in March of 1961 at the Geneva Motor Show, following the famous 11th-hour disorder (one of the cars was driven to the show from England with just hours to spare). The car was an immediate sensation: its specification was state of the art, its bodywork arrestingly gorgeous, and the price surprisingly affordable. It embodied William Lyons’ values beautifully and it is no surprise that the E-Type has become such a legendary part of automotive history. The specification clearly demonstrated Jaguar’s racing experience and included semi-monocoque construction, independent suspension all around (at a time when Ferrari was still using live rear axles), disc brakes all around (inboard at the rear to reduce unsprung weight), and of course Jaguar’s legendary twin-cam inline-6. The Series I was continuously developed, with the addition of the newly developed 4.2-litre engine coupled with a fully synchromeshed gearboxes for 1965.

Beautifully finished in Signal Red coachwork with Charcoal Black hide and sitting on 4 new chrome wire wheels with period Michelin tyes. The . Significant restoration work was carried from 2008 to 2013, including a full cosmetic restoration and significant mechanical work as well. These works included a complete engine rebuild, new clutch, throw-out bearing, and balanced flywheel, suspension work, new trim, replacement chrome where needed, engine compartment detailing and countless other items were addressed. During the restoration process a huge amount expense and attention to detail paid to improving performance, cooling, handling, braking to cope with strains of modern traffic. The Brakes were upgraded with 4 pot calipers twined with ventilated brake discs. Kelow fan with larger race spec radiator was fitted to assist with cool running as well as a modern high output alternator and starter modern. The suspension up-graded to race-spec adjustable Koni Classic shock absorbers, lastly to improve the over performance and theatre a custom made full stainless steel exhaust from the manifold running through to the tailpipes, the standard triple SU’S were removed and triple Webbers fitted as their replacement which when in the higher rev range really adds to the overall theatre.

Having benefited with just 3 owners in 42 years this is an extremely special opportunity to acquire a well sorted matching numbered car with all the wonderful touches you would want to improve the running.