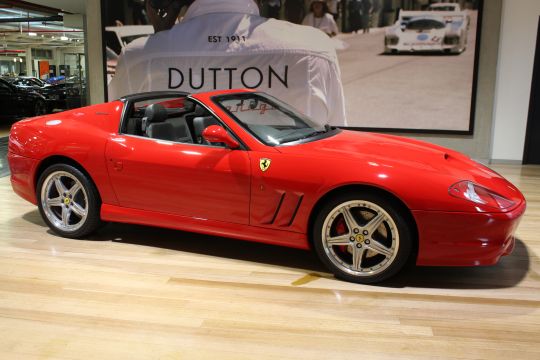 Here is a very special opportunity to secure an as new Ferrari supercar.

The 2005 Superamerica was named after a series of limited edition V12 Ferraris built from the mid 1950s to the early 1960s, and remains similarly rare, with only 559 examples built. Designed by Pininfarina, the Superamericas most unique feature is its Revocromico roof. Consisting of an electrochromatic glass roof panel which can be tinted in varying degrees of shade to suit the occupants, this panel spins around to change the car from a coupe to a roadster in seconds. At its debut, the Superamerica was the fastest convertible berlinetta in the world, with a top speed of 199 mph.
Based on the 575M, the Superamerica also received upgrades to the engine intake and exhaust system, resulting in an output of 540Hp, 25Hp more than the standard car.

This Australian delivered factory RHD example has only travelled 375 kilometres, having been collector owned from new. As you would expect, it remains in perfect as new original condition. It is complete with all its tools, car cover and books and manuals still plastic wrapped from the factory.

This would have to be the most original and lowest mileage Superamerica available anywhere.