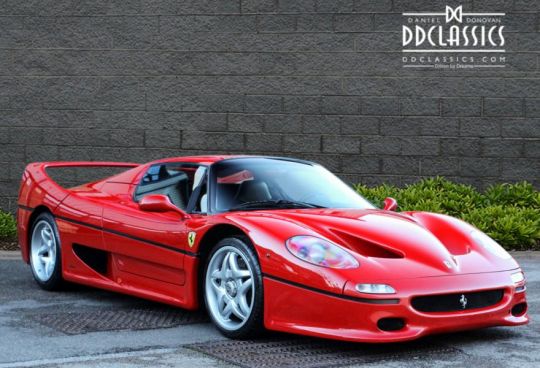 The goal of Ferrari’s F50, which was built on the culmination of four years of development and fifty years of success in motorsport, was to offer customers an experience as close to a Formula 1 car as possible but on a road-legal platform. In essence, the Ferrari F50 was just that: an F1 car at heart, but it had been designed and engineered to be driven on the road.

Unlike its other supercar siblings, what enthusiasts enjoy most about getting behind the wheel of an F50 is the open-air experience it offers. Without a fixed roof, both driver and passenger get to enjoy the car’s full exhaust note, with nothing overhead to muffle the glorious sound. Although its engine holds close ties to Formula One engines of the era, it has a great reputation for being easy to drive in comparison to other Ferrari supercars, both newer and older.

Only 349 examples were made, one less than what Ferrari believed the market demanded and just over a quarter of total F40 production. This is one of the reasons that this model is one of the most desirable of all Ferrari Supercars and is probably the most sought after model for investors and enthusiasts alike.

DD Classics is pleased to offer this stunning example for sale. First delivered new in Germany on 31st January 1997, our car is finished in the legendary colour scheme of Rosso Corsa with Nero hide and Red Alcantara inserts, it is a truly beautiful thing to behold.

Having only completed a mere 5,591 miles (8,999 km) from new, this F50 is in spectacular condition, the Nero leather appears to be unworn and the carbon fibre dashboard and door-cards look virtually new. Accompanying the car are the original Ferrari books and fully stamped service book as well as its Certificate of Origin and corresponding photograph box.

Most importantly with an F50 is the carbon fibre weave is visible across the car, confirming its originality and concretes this cherished example as one of the best available today.

The F50 is undoubtedly one of the most iconic vehicles created in the 1990s, as it celebrates 50 years of Ferrari’s continuous development and integration of road and racing technology. It was the supercar that gave Ferrari’s most loyal customers the opportunity to experience the same levels of performance and exhilaration previously reserved for Formula 1 drivers.