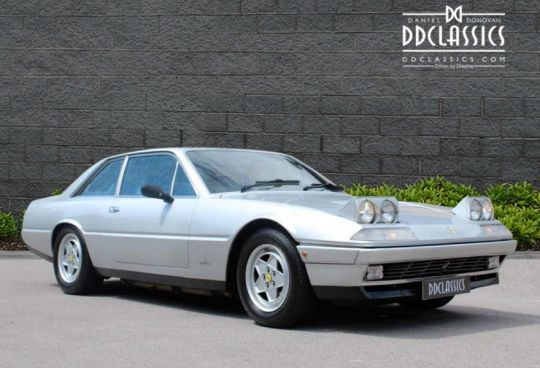 In the autumn of 1984 it was announced that the production of the 400GT range was to cease.  At the time no word was given of a replacement.  The most obvious candidate was the long-deferred “Pinin”, but that possibility was quickly denied by Ferrari spokesmen.  The guessing game started but did not have to go on for too long, as at Geneva in March 1985 Ferrari put on show the 412.

Looking at the new car, one is in no doubt at all about its ancestry.  It is very clearly a further development of the 400GT range and at first glance can easily be mistaken for one. As an aid to what one American report has referred to as ‘air flow management’, the front spoiler has been deepened and skirts have been added to the lower body panels along the length of the car and under the rear panel.  The tail is higher by about a couple of inches.  The wheels retain their traditional 5-pointed star form but have been modernised.  The bumpers, both front and rear, are colour-keyed to the body colour.  The fog lights no longer hide behind the front grille. In the interior, the front seats are electrically controlled and redesigned headrests are fitted to both the front and rear seats.  The seat belts have been repositioned.  The efficiency of the air conditioning and ventilation has been increased through a new electronic control system. The capacity of the engine, as noted above, has been increased to 4924cc and this, together with other detail modifications has put the power up to 340bhp but at 6000rpm, i.e. 500rpm less than the same level of power for the 400GT before fuel injection was introduced.  The Marelli Microplex system of electronic ignition combined with new injector design is said to be responsible for a lower fuel consumption and better volumetric control.  A new exhaust system has been provided in order to comply with the latest batch of regulations.  To cope with the increased power and torque, a new 9½-inch clutch of the double-disc type has been fitted.  The front suspension has been redesigned in order to adapt it to the Bosch ABS system of braking that has been incorporated into an already excellent braking.

Supplied new by Maranello Sales of Egham in April 1987 and delivered to the first and only Malaysian owner;- His Highness, The Sultan of Selangor, soon after.

The car is finished in Argento Metallic (Fer 101/C) with Nuvola hide, blue carpets. The body is in beautiful condition and looks to be free from rust or damage. The interior is in completely original condition with no damage or tears to the hide or carpets. A very capable Grand Tourer that will surely appreciate in value over time.