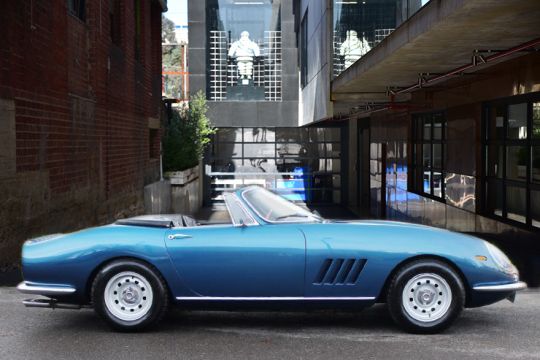 It looks almost too good to drive. Could anything so perfect in line and proportion possibly be more than an ornament? Truth is this Ferrari 275 GTS/4, known as the NART Spyder, is so beautiful, you can have a more intoxicating experience just looking at it than driving most sports cars. And we owe it all to one man and, no, it’s not Enzo Ferrari.

Like so many great sports car importers, Luigi Chinetti recognised the viability of sporty open cars in the American market. As such, the N.A.R.T. Spider was born of a direct request from Chinetti to offer his buyers precisely what they wanted. Adding the recognisable North American Racing Team badge to the back of the car certainly helped its cache. N.A.R.T., after all, was one of endurance racing’s most successful teams, with a banner campaigned by the likes of the Rodriguez Brothers, Bob Grossman, Masten Gregory, Phil Hill, Jean Guichet, and many others.

As Luigi Chinetti Jr. recently recounted, “As an open version of the 275 GTB, it’s a very romantic car. To this day, many people think it’s the prettiest car ever made, and certainly the romance with the little prancing horse in the centre of the steering wheel is a very powerful thing. It signifies history and design.”

Our incredible 275 GTB was exquisitely converted to Nart Spyder specification by highly regarded marque specialists “Moto-Technique” in 1988. The superb history file still contains invoices and photographs detailing the works carried out. In 1990, the car apparently won second prize in class D of the UK Ferrari Owners’ Club Concours, the winner must have been a bit special because this is still simply stunning 18 years on! You’d be hard pressed to tell this example from an original NART, of which just 10 were made. It even has the bonnet bulge which identified the four-cam model.

Finished beautifully in Azzurro Metallizzato, complemented by wonderful Coffee Tan hide with a Black top-roll, a stunning interior representing the pinnacle of 1960’s exoticar. The leather remains in superb condition and the dashboard is particularly neat and stylish, with the full complement of Veglia dials beautifully laid out.

Accompanying the car is a comprehensive history file with numerous invoices of works carried out, previous MOTs, a German valuation report and an album featuring a photograph of Michael Schumacher with the car.