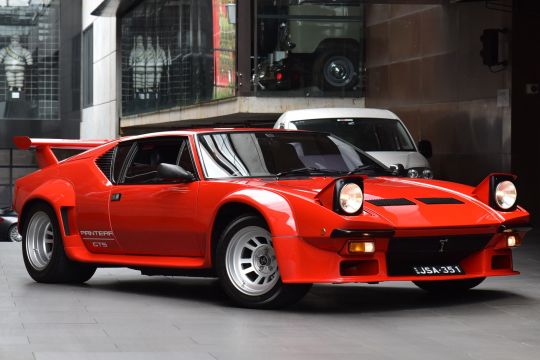 Early 1980s and the Pantera had matured into an altogether more sophisticated supercar, with flared guards covering beautiful Campagnolo rims shod with the widest section Pirelli P7s available, front spoiler and a Countach-inspired rear wing.  Using Australian-sourced 351 Clevelands running a single Holley four-barrel carburettor by this stage, power was up to 350bhp at 6000rpm in standard form (and plenty more with a little tuning), This example has a dyno tune verification showing 500+HP.

This immaculate example was delivered new in 1985 and has been lovingly kept as part of an Italian Supercar collection.Just how many GT5 Panteras were made is the subject of much conjecture but a reliable guess would be around 240, of which only a handful were specified with right-hand drive.

In 1984 Paul Halstead of The Toy Shop fame entered the picture establishing De Tomaso Australia, who continued building GT5s until early 1986, including Dr Geoffrey Edelsten’s infamous pink example – painted to match his helicopter, although cars continued to trickle out of Italy (in revised GT5S form) until 1990. This stunning example has massive global significance and desirability please act now before it is gone,.............Make Mine Rare.