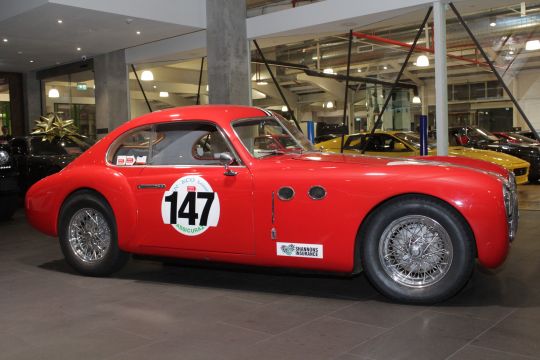 This example is a matching number 202 classic with fascinating history.
The car was built in October 1947 and was sold new and first registered in Trieste, Italy. In 1950 the car was sold to Mr. Nino Bosari who was an Olympic cyclist gold medalist in 1932.
Nino Bosari was a popular personality in Melbourne's Little Italy, Carlton. He migrated there in 1939 and opened a bicycle shop which is now a Carlton landmark today. Bosari imported the car to Australia with him in 1950 and raced it over the next five years, Rob Roy Hillclimb, the Ballarat Aerodrone, Bathurst on Easter 1951, Strathpine 1953, and Fisherman's Bend in 1954.
There are numerous photos of the car in competition from this period as well as photos showing the car on Concours display. The car comes with many clippings from newspaper articles, magazines and race programs. In 1960, the car changed hands to Mr. Ian Hall and later to Rino Boccalatte in 1988. The car participated in Mille Miglia in Italy, and then Monterey Historic's and then in 2012, California Mille.
This car comes with a comprehensive history file.
This car would suit the enthusiast/collector to purchase this extremely rare Cisitalia 202