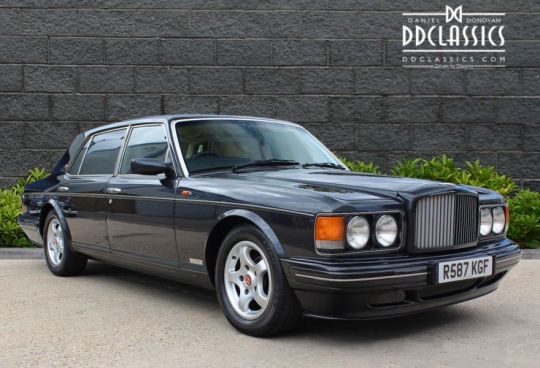 The Bentley Turbo RT was the last, rarest, most powerful and most expensive of the Turbo R line, only produced during 1997 and 1998 a mere 252 examples were manufactured. It is visually differentiated from other Bentley Turbo R models by its sport wheels, colour-coded grille slats and colour-coded bumpers. Performance is sufficient; with a 400 bhp engine producing a top speed of 150mph, the ultra-luxurious Turbo RT was one of the fastest luxury saloons of the time and the fastest ever Bentley saloon to be made.

Our Bentley is finished in the most resplendent combination of Graphite with contrasting Parchment hide, piped with Ebony. The Turbo RT has an Ebony top-roll, carpets, lambs wool over rugs and has a beautiful Burr Walnut wooden dashboard. Passengers in the rear will undoubtedly benefit from the equally stunning Burr Walnut fold out picnic trays. Luxuriously appointed and in fabulous condition throughout, our Bentley Turbo RT will not disappoint upon final inspection.

As expected in a Bentley, the drive is incredible. With its huge engine and smooth gearbox the Turbo RT is a fantastic daily driver.