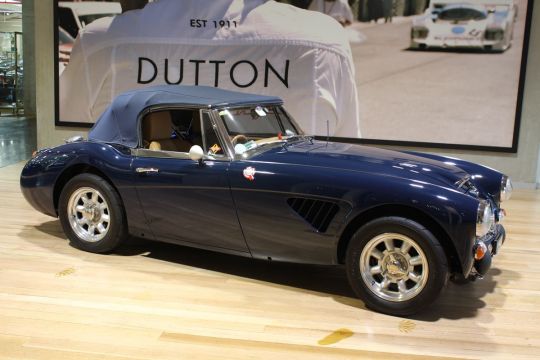 The best known of the "Big Healeys," this 1966 Austin Healy Mark III 3000 Convertible in Imperial Blue Metallic over Brown Leather has been beautifully modified with painstaking craftsmanship and care! Many agree this is perhaps the best looking classic sports car ever produced!聽

Founded in Great Britain in 1953 through an arrangement between the Austin division of the British Motor Corporation and the Donald Healey Motor Company, Austin Healey produced high performance sports cars that gradually evolved into luxury-laden high speed touring cars. The 3000 was first introduced in 1959, with the Mark III making its debut in 1963. The MK III 3000 came standard with twin SU 2 HD8 carburetors, making 150 horsepower, and servo-assisted brakes, to help slow the car from its nearly 120 mph top speed! A total of 17,712 Mark IIIs were built and it is increasingly difficult to find examples in this type of immaculate condition!
This Austin-Healey is accompanied with聽the British Motor Industry Heritage Trust Production Certificate and Authenticity number 98/9414. Magnificent in every respect, this stunning convertible has won accolades and awards of special distinction and prestige at the Concourse d'Elegance including: