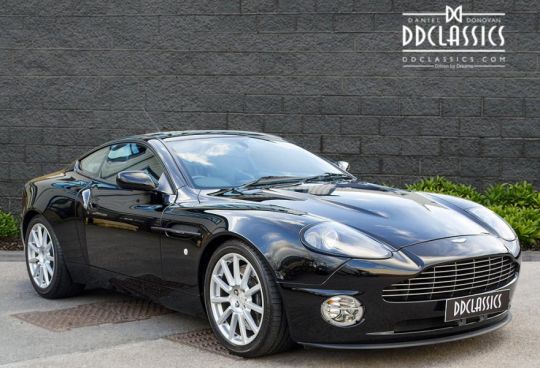 Aston Martins have always been at the forefront of many distinguished automotive enthusiasts collections, with iconic shapes that are permanently etched into our minds. The popular first generation Vanquish S is no exception, designed by Marek Reichman & Ian Callum.

This Vanquish S Ultimate Edition can only be described as a very important milestone in Aston Martins history. Marking the end of car production at Newport Pagnell and distinguishable by the unique ‘Ultimate Black’ paint featuring hints of Red and Blue which was only available on these special edition models. As you would expect from such a low mileage example, the bodywork is superb. An important plaque denoting its heritage and limited production run confirms the limited edition authenticity.

Clearly cherished by its previous owner, this fabulous example is specified with generous comfort features such as sports seats, 2+2 seating configuration heated seats and the premium audio system. The whole interior is in wonderful condition with the luxurious Black leather remaining unmarked.

On the standard V12 platform the Vanquish S is quite simply an astonishing feat of engineering, sitting in the position of Aston Martins fastest ever production car (in 2007) with a top speed in excess of 200mph. Specified with the modern ASM system, the drive is exciting and engaging, a sensational sound emits from the smooth V12!

As the Vanquish S Ultimate Edition would be the very last model to celebrate the skilled craftsmanship of the team working at Newport Pagnell it was only offered on special order to the closest of customers. This is just 1 of 50 examples, and here is a rare opportunity to own one.