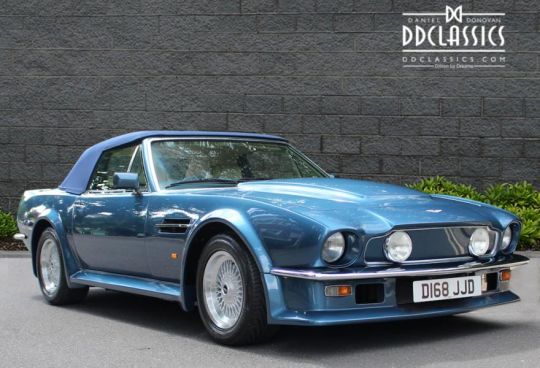 Produced to satisfy demands from the USA, the Volante convertible debuted in 1978, but it was not until 1986 that it became available to Vantage specification, which by this time meant around 400bhp. Along with the Vantage engine and bonnet came flared wheel arches, boot spoiler (a feature the Volante had previously lacked) and extended front spoiler, while glass fibre extensions replaced the model’s hitherto characteristic chromed sill covers. The result was a muscular, aggressive-looking car that could justifiably claim to be the world’s fastest convertible, all the more so when it came with the optional 432bhp ‘X-Pack’ engine.

A genuine Aston Martin V8 Vantage Volante X-Pack, chassis number ‘15575’ comes with an Aston Martin heritage certificate showing the car still presents in its original colour combination of Chichester Blue with Parchment hide with Dark Blue piping. Our car has recently received a full, bare-metal respray and looks absolutely stunning, especially with its beautiful Ronal wheels which remain in fabulous condition, it will not disappoint upon final inspection. The Blue Mohair soft-top is also new and in superb condition as is the coachwork which is extremely straight and the chrome remains bright and un-pitted.

This car was sold by us to the last owner.

DD Classics is proud to offer such a rare and stunning example and believe it to be one of the finest examples currently available for sale in the world today.