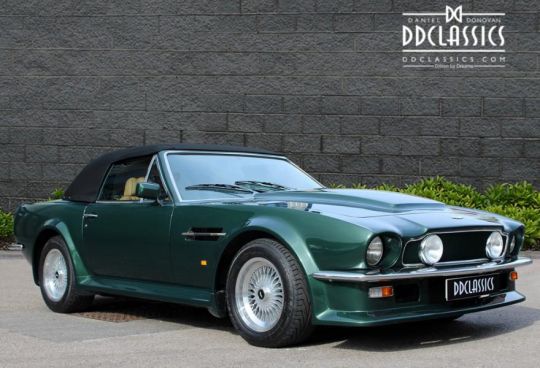 Produced to satisfy demand from the USA, the Volante convertible debuted in 1978, but it was not until 1986 that it became available to Vantage specification.

The Vantage Volante X-Pack was re engineered to have the higher power engine and a much more muscular appearance which included a different bonnet, flared wheel arches, a boot spoiler (a feature the Volante had previously lacked) and extended front spoiler and sill extensions that replaced the model’s hitherto characteristic chromed sill covers. The result was a handsome but aggressive-looking car that could justifiably claim to be the world’s fastest convertible, even more so when it came with the 432bhp ‘X-Pack’ engine.

Meticulously maintained and never used in bad weather this example is presented in fantastic condition. It is finished in one of the most desirable and classic colour combinations of Balmoral Green with English Tan Connolly hide interior. The type 580X and retains the original quad-downdraught carburettors setup. All rubber elements, filters and brakes have been replaced and the engine has received a complete service by Aston Martin specialists. This level of condition is mirrored in the body, hood and interior, where the hood and leather have been regularly treated and maintained and appear as virtually unused.

The car comes with its original Ronal wheels which were only produced on the later Vantage production models but have now become exceptionally rare. It also retains its toolkit that is comprised of 100% correct components.