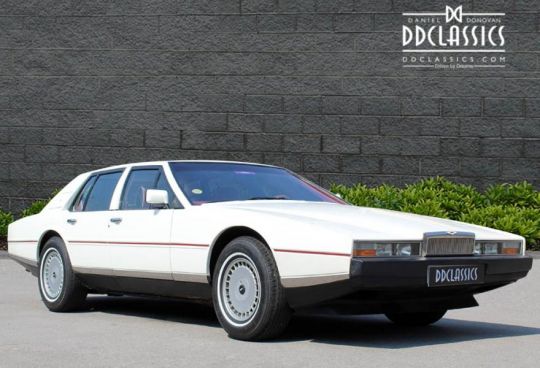 Designed by William Towns, October 1976 saw Aston Martin reveal a striking new model, a new 4 door Lagonda with innovative solid state digital instrumentation, a futuristic concept at the time. Lagonda created a wave of publicity for the company and the order book filled rapidly, particularly from the Middle East market.

The Lagonda’s engine and chassis bowed to Aston Martin tradition, but the rest was pure sex appeal. There was nothing else like it in a luxury sedan. It was just an inch shorter than the Mercedes-Benz 450SEL, yet it was over 5 inches lower. Industrial designer William Towns (who styled the Aston Martin DBS in the mid-sixties) was responsible for the sensuous and futuristic wedge shape while Chief Engineer Mike Loasby is credited with its electrically-selected three-speed automatic transmission, pop-up quad halogen headlamps, and the dashboard with digital read-out instruments.

DD Classics is proud to offer this 80’s icon for sale, finished in its striking original colour of Dover White as stated on the Aston Martin heritage certificate that accompanies the car. Inside, the Lagonda is staggeringly opulent, the Red Connolly hide is enhanced with contrasting White piping. Both the top-roll and gearbox facia tunnel use the same Red Connolly hide and the luxurious Wilton carpets are finished in the same style, Red with White piping. Beautiful Walnut veneer trims complete the interior furnishings.

Our car is in superb condition throughout and must be seen to be fully appreciated.

A total of 645 chassis were built before the end of production in 1989 and each car required 2,200 man-hours to build.

The quality of craftsmanship which goes into any Aston Martin product is a throw-back to an age when only the best was good enough. Today, the Aston Martin Lagonda continues to make quite a statement about its owner. In this case, it is one of English elegance with modern performance and utter uniqueness.