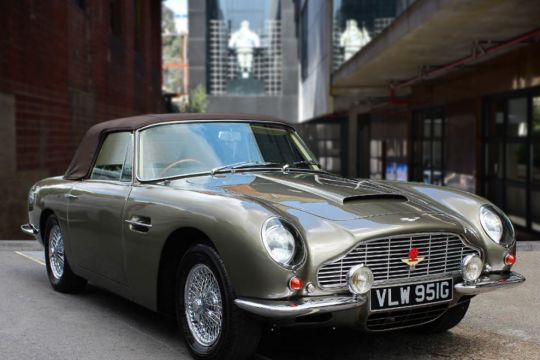 The Aston Martin DB6 was launched at the 1965 Paris/London Motor Shows, arriving at a difficult time for the company with the UK economy struggling and the U.S market becoming subject to more and more regulation. Their primary aim was to increase the rear-seat space of the immensely popular DB5, resulting in an extensive re-style with a raised roofline and reshaped rear quarter windows. The resulting design made the DB6 a genuine four-seater tourer.

1 of 140 ‘Mark 1’ DB6 Volantes made, this particular DB6 was supplied by HR Owen in September 1968 in Croydon, Surrey. The Aston Martin Heritage certificate reveals that the car  left the factory equipped with Borg Warner automatic transmission, power assisted steering, chrome road wheels, three-ear hubcaps, power aerial, and two Sebring wing mirrors. Our Aston was registered with the number ‘VLW 951G’, which it retains to this day.

Subject to a very comprehensive rebuild by recognised Aston Martin specialists several years ago the car is in immaculate condition. Works undertaken include removing and overhauling the carburettors; a full engine tune; overhauling the suspension; fitting the manufacturer’s up-rated brake servo kit; installing new Wilton carpeting; and replacing all five tyres with new radials. Other parts renewed include the water pump; crown wheel and pinion; front and rear hubs; and front wheel bearings.

Invoices for all of the aforementioned works are in the substantial history file with invoices from 1977 till the present day and assorted documents, including a substantial quantity of expired MoTs. An original handbook, and Aston Martin Heritage Certificate is included within the vehicles history file as well as an original Aston Martin toolkit.

Offered here is a stunning example, finished in Old English Pewter with Magnolia leather interior, our DB6 Volante is presented in beautiful condition through out. Our DB6 Volante has a lovely Brown Mohair soft top with a Magnolia Tonneau cover that matches the interior. Dark Green Wilton carpets line the floor and gearbox facia tunnel which enhance the cars stunning appearance.